Worried about transfer of your data from Android to iPhone X after setup? All your questions will be answered in the article, read it to know more!

So, read the article below and know all you need to on how to transfer data from Android to iPhone X after setup.

Part 1: How to transfer data from Android to iPhone XS with Move to iOS 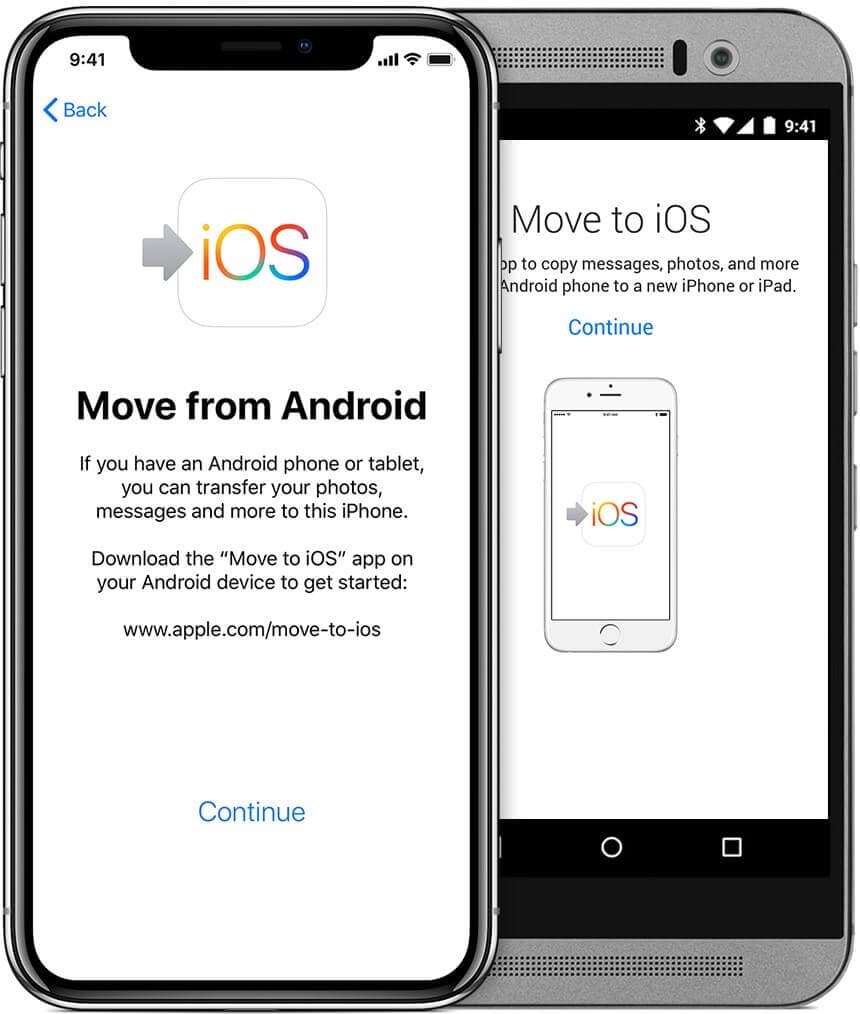 Apple Inc came up with the new and awesome Move to iOS function, that lets iOS users get the data from Android to iOS devices easily. In this part we will look at how to transfer data from Android to iPhone X after setup using this awesome feature from Apple. Move to iOS app for Android supports various data types which are Photos, Videos, Music files, Documents and Apps, Mail, Calendar and Contacts, Books and PDFs

It is essential to get a couple of things in order before you set the ball rolling. Here are some of the things to consider.

1. Firstly, turn on Wi-Fi on the Android device. 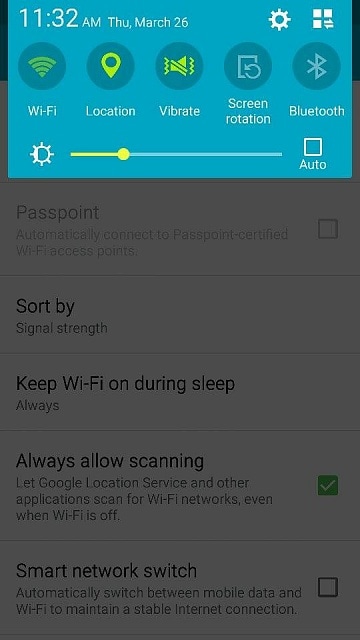 2. Secondly, connect the Android and iOS device to power.

3. Thirdly, confirm and ensure that the data being transferred, including that on the Micro SD card, does not exceed the storage size of the iOS Device.

4. Lastly, when transferring web bookmarks such as those of Chrome, make sure that app is of the latest version on the Android Device.

Start to Transfer Data from Android to iOS Devices using the Move to iOS App offcially:

Step 1: Configure the Settings (on the iOS device) 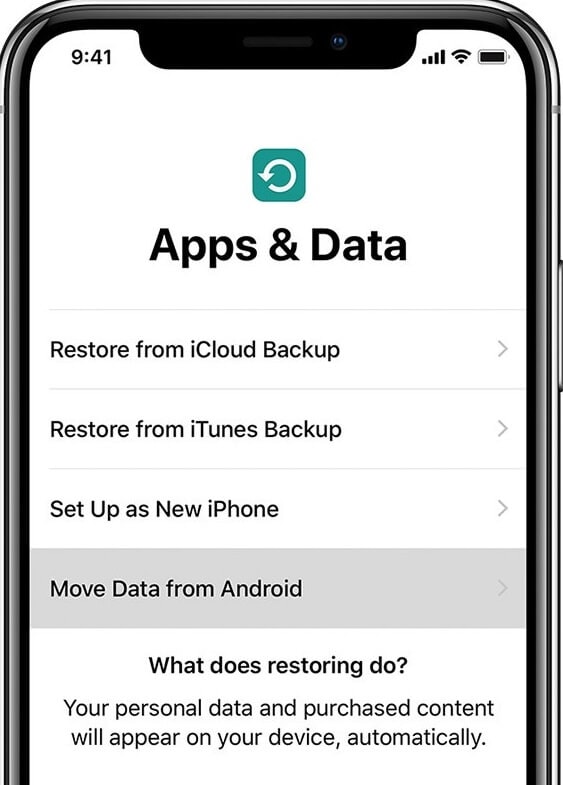 Step 2: Launch the Move to iOS App (on Android Device)

You will have to download the app on the Android device to use it. After downloading and installing, proceed to launch it and agree to the terms and condition. Tap on the Next option at the top-right corner of the screen to get a connection Code. 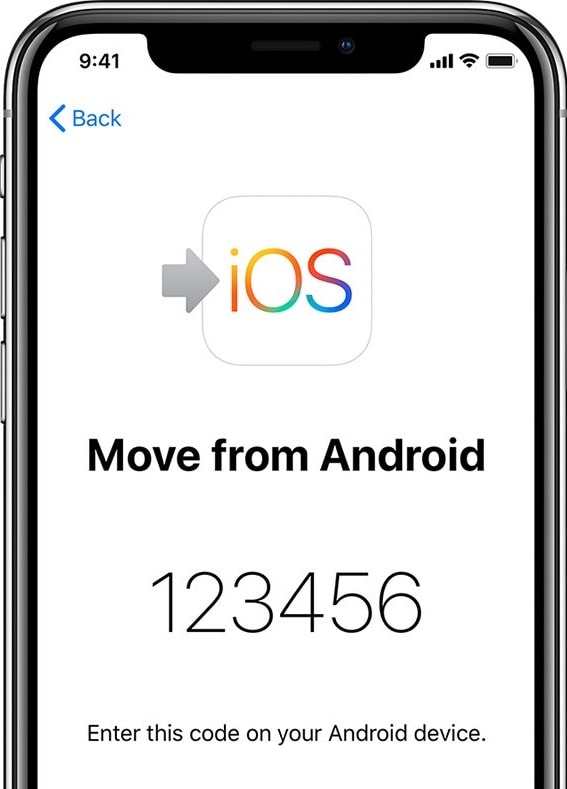 While waiting for the code, you will need to tap on the “Move Data from Android” option on the screen to get a ten, or six-digit code. Note, you may need to ignore some alerts prompted on the Android Device such as those stating a weak network connection.

After getting the code, input it into the Android Device and await a Data Transfer Screen to appear.

This is the point where you will need to select the content to be transferred. Tap on the Next prompt to continue with the process. Note, you will have to leave both the Android and iOS Device alone until the process is over. To confirm this, wait until the loading bar on the iOS Device clears or finishes. 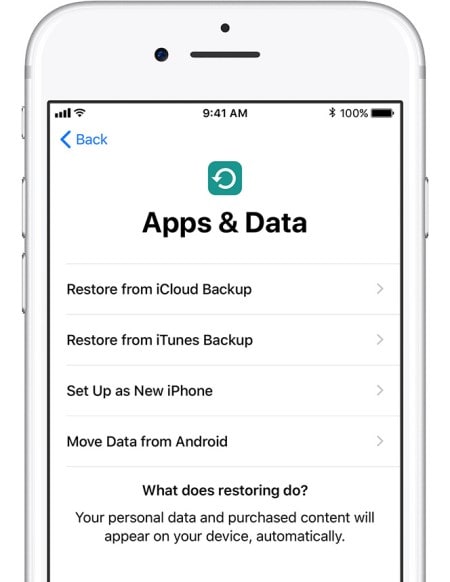 Step 7: Wind Up the Process

Note that some data such as music and books need to be transferred manually. Also, confirm that all the required data has been transferred. For the apps that were from Google Play, you will need to download them once more from Apple Store.

Part 2: How to transfer data from Android to iPhone XS after setup?

You can also transfer data from Android to iPhone XS without much complexity and that too instantaneously. One way to achieve this is through the use of software that supports data transfer. One such highly recommended software is the dr.fone - Phone Transfer (iOS&Android). It supports many file types that include apps, calendar, contacts, call logs, music, messages, photos, and videos. It also has some great features such as the ability to supports phone to phone transfer. One can create a backup or restore from different backups too, using this tool.

Just follow the steps to understand how to transfer data from Android to iPhone using dr.fone - Phone Transfer (iOS&Android)

First of all you would have to get the software, install and then launch it.

Step 2: A Successful connection between device and PC

Once the software has been launched, use the “Switch” function to transfer data from Android to iOS. After clicking on this option, connect the two devices to the PC using a USB cable and wait for the software to scan the devices after successfully connecting. 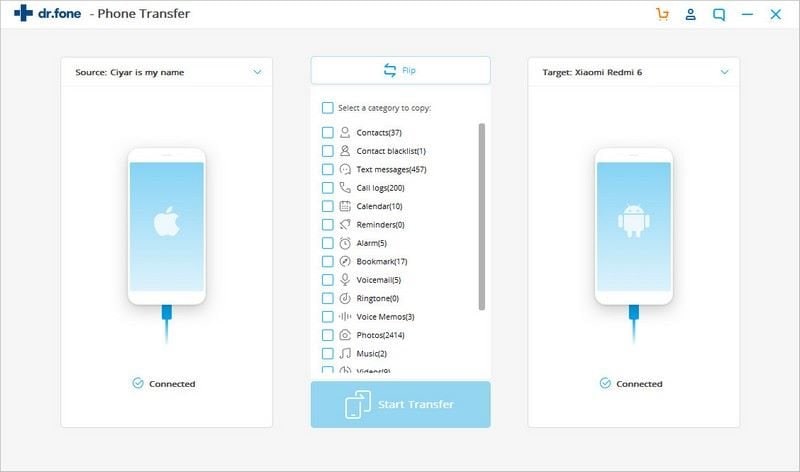 The connection will be displayed as above and you can choose the device you want to be the source device. Select the data you wish to transfer from Android to iOS. Click on the “Start Transfer” button to initiate the process and get the data to the iOS Device. 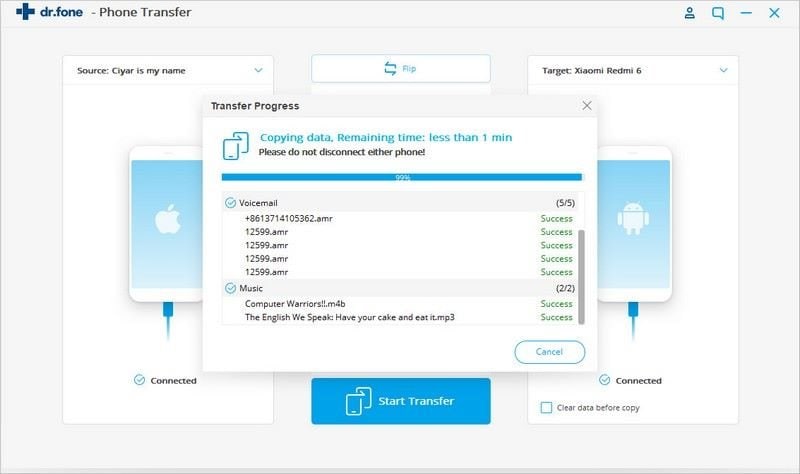 In a matter of seconds, all the selected data will get transferred from any Android device to iPhone XS and with a secured transfer mechanism. dr.fone - Phone Transfer (iOS&Android) (iOS&Android), will help you realizeits utility of the transfer process due to its good pace during the process.

Part 3: How to transfer the photos from the Android to the iPhone XS?

This option is only for the transfer of photos to the iOS Device from the Android Device using Google Photos. The method is simple and secure wherein all you need is a working Internet connection to get the process done.

To transfer data from Android to iPhone XS, (such as that of photos) using Google Photos follow the steps as explained in the following lines.

The first step requires that you Back Up and Sync the photos on your Android Device to Google Photos. 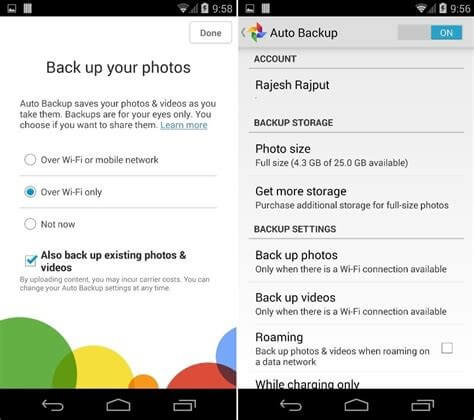 Part 4: How to transfer the contacts from the Android to you iPhone XS?

This is the power of Cloud enabling one to transfer data from Android to iPhone XS. Using your Google account and its cloud service thus becomes a viable option. After using this method, you will see that all the changes directly made to the phone book will sync to the Google Accounts. You will have the ability to share the contacts on the iOS device as you please and they can still be accessible via Android. 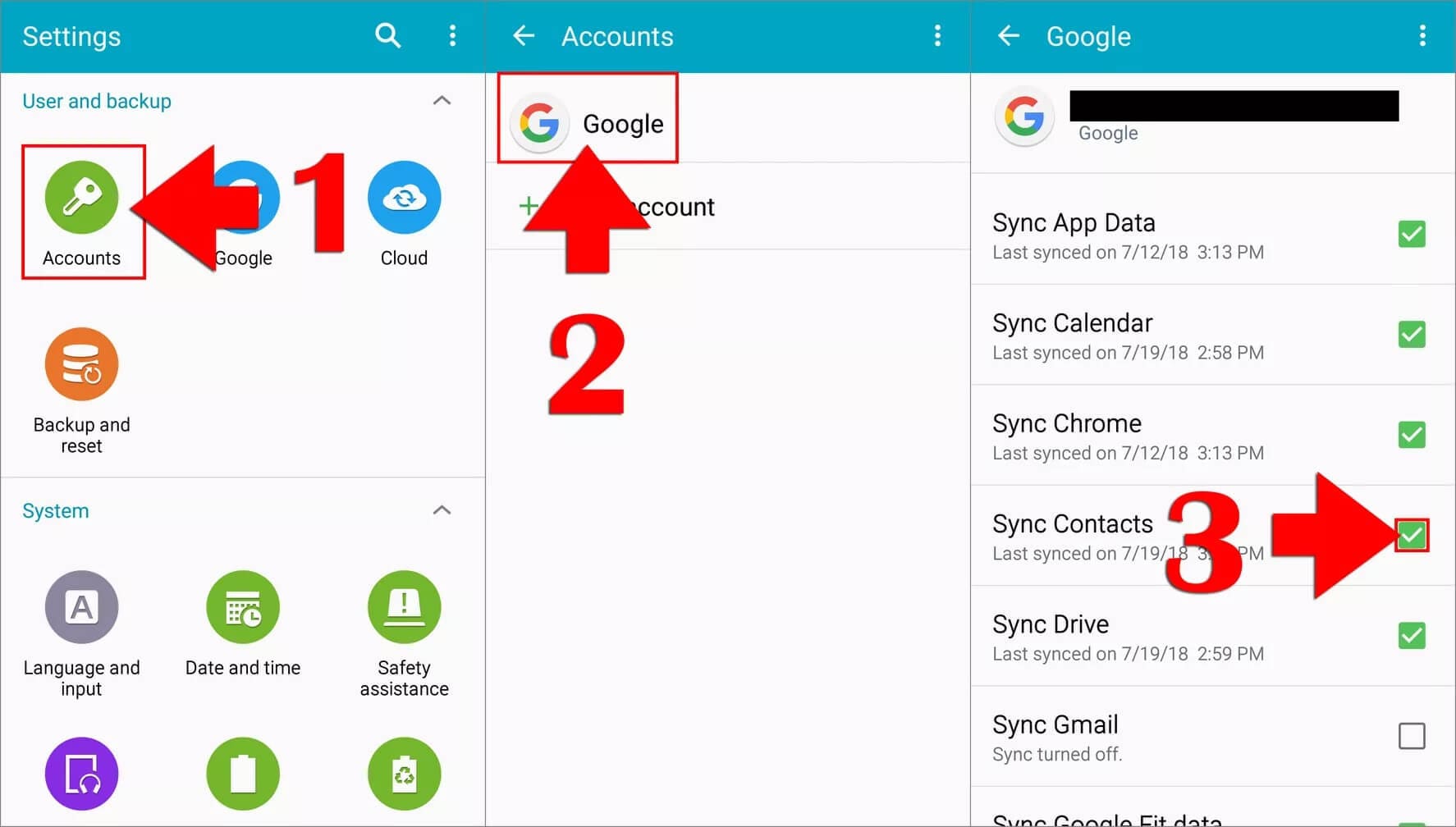 Back up and sync all your contacts on Android to your Google Account. The process starts with visiting the “Settings” app > “Accounts” option. There click on Google icon and choose your Gmail account. Here you will see the synchronization option to various services. Under Contacts choose the “Sync Contacts” option.

Next is to add the Google Account to the iPhone or iOS Device. For that visit the Settings application and choose “Accounts and Password”. There you need to add your Gmail account.

Enable contact syncing once the account is set up. You will need to move the Contacts slider to On position, usually marked in green and the contacts will sync, adding to your iPhone automatically.

Now, if you check then you will find that all the contacts from the Android device are now available on the iPhone XS device too.

You should no longer worry about ways to transfer data from Android to iPhone X after setup as we have clearly discussed some new and easy methods to do so through the article. Among all the 4 ways listed above, the most profound method is by either using the Move to iOS app or the dr.fone - Phone Transfer software. The software is highly recommended as it comes with other features to aid in backing up and restoring data. Also, in this article we covered how you can transfer the photos and contacts data from the Android to iOS device.

So, use these methods diligently with all the steps one by one and share with us your experience. We would love to hear from you.

The Easiest Way to Transfer Photos from Android to Android

Find ways to transfer photos from Android and Android here! There are ways that you can easily transfer pictures from one Android phone to another.

Proven Ways to Export Videos from Android to PC [8Ways]

Have you ever thought of copying videos from Android to PC? Are you not getting any suitable hint on how to do it in less time? Carefully read this article and you will get your doubts cleared.

Do you wish to learn how can I transfer songs from computer to Android? Read on as we have listed 5 ways to copy music from PC to Android in this extensive post.

[Top 7 Methods ] How to Transfer Photos from Android to PC

If you are pondering over the best way to transfer photos from Android to PC, you are at accurate place. We will show you how you can carry out this through different methods.

Transfer Videos from Android to Mac like a Pro: 7 Proven Solutions