How to Update iPhone 4/4S to iOS 9 Easily

iOS 9 released on 8th June 2015, iOS 9 comes up with subtle design changes, improved functionality, refined features, and performance enhancements. It also includes a Wallet app with a store, an updated Notes app, a new News app, transit directions in Maps and loyalty cards, and an optimized battery backup. Proactivity and intelligence are the main concerns of Apple to make iOS devices learn user habits and act on that accordingly.

If you are worried about how to update iPhone 4 to iOS 9, then you have reached a perfect place, in this article, we are going to show you how to update your iPhone easily and safety.

Part 1: 4 Things you Need to Know Before Updating iPhone 4/4S to iOS 9

Before we start updating our device, let's take a look at some tips and things that we should prepare before we update the iPhone. 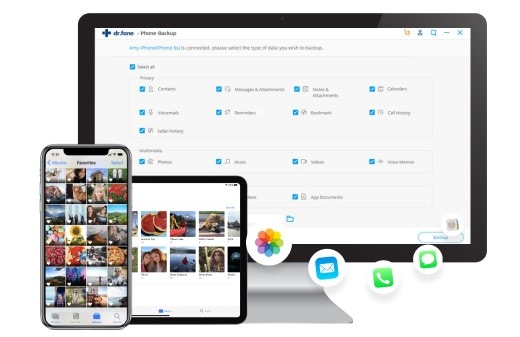 If you want to update iPhone 4s to iOS 9, then before do so, first ensure that you have made a complete backup of your iOS device.

If not yet, you would require the recommended tool, dr.fone - iOS Data Backup & Restore to perform a full backup of your iPhone in just a few simple clicks. dr.fone is a trusted and 100% safe to use software that guarantees your data will be absolutely safe and secure with its Privacy Protection Policy. The software enables you to either selectively or completely backup your iOS device data depending on your requirement.

Let's now have a detailed look at the key features of this powerful tool.

Download dr.fone - Phone Backup (iOS) to have a try!

2. Check Compatibility Of Your Device

Another thing you need to know when you are dealing with how to update iPhone 4/4s to iOS 9 hassle-free is the compatibility of your iOS device. iOS 9 is currently available for iPhone 4s and models, which came afterward. You can also upgrade it for iPad Air 2 and iPad mini 2 and 3 efficiently.

So, if you have an Apple device that operating system. iOS 9 requires storage is not compatible, you should stop then and there from making an upgrade as it may harm your device. Plus, you should check and then upgrade your iOS device to the new iOS version to avoid problems later on.

When you download and install the new firmware on your device, you are notified of the need for free space. Ample of space may be required to install the upgraded version of the operating system. iOS 9 requires a storage space of about 1.3 GB on your iPhone. Free up some disk space on your iPhone by either deleting your media files or by storing them at another location. You can restore the data back to post the up-gradation process.

Update apps and games to the latest version before upgrading iOS 9 as you might not be able to open, delete or update the apps after the iOS upgrade. It may also cause apps crashing and freezing. Hence, it is recommended to know how to update iPhone 4/4s to iOS 9 prior to rolling out the process.

Keeping in mind the above mentioned necessary tips, you can easily update iPhone 4s to iOS 9 without troubling yourself in future.

Of course, you can also try the WhatsApp built-in email feature to export WhatsApp messages. This is an appropriate solution if there are not so many WhatsApp messages that need to be exported. Now let's take a look at some tips on how to operate this for both iPhone and Android.

The wireless delivery of new software or data to mobile phones and tablets is known as over the air update. If you want to upgrade the underlying operating system, OTA updates are just meant for you. As the name suggests, you get your updates from wireless carriers, not via USB or other connectivity methods.

Over the air technology is basically used to administer Software Updates, configuration settings, etc directly to your portable devices like Smartphones and tablets. For an over the air (OTA) updates, you should follow these steps.

Step 1 . Head straight to the 'Settings' of your iOS device first.

Step 2 . Next, scroll the settings menu down and get into the 'General' section.

Step 3 . Lastly, push the 'Software Update' tab and then the device will automatically check for the latest firmware update available for your iOS device. 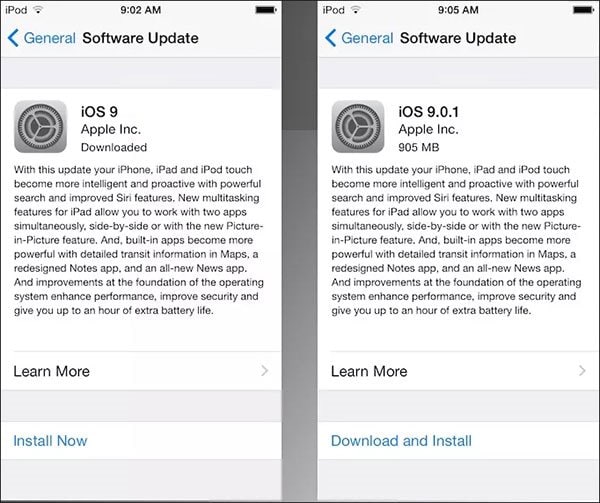 When you think about how to update iPhone 4/4s to iOS 9 safely, then the first thing that comes in your mind would be iTunes. The default iOS data management software is designed in a very simple way, making it easier to navigate between sections. You need to follow these steps to update iPhone 4s to iOS 9 easily.

Step 1 . Make sure that you have the latest version of iTunes installed on both your computer and your iPhone.

Step 2 . Now, plug in your iOS device into your computer with the help of a lightning cable supplied with it.

Step 3 . Next, launch the iTunes on your computer and it will detect your iPhone automatically. Now, select your iOS device. And get into the "Summary" section.

Step 4 . Hit on the 'Check for Updates' button and iTunes will look for the latest firmware update for your iOS device.

Step 5 . Lastly, it will throw a pop up on your screen if the latest firmware is available for your iOS device. Hit on the "Download and Update" button to initiate the update process. 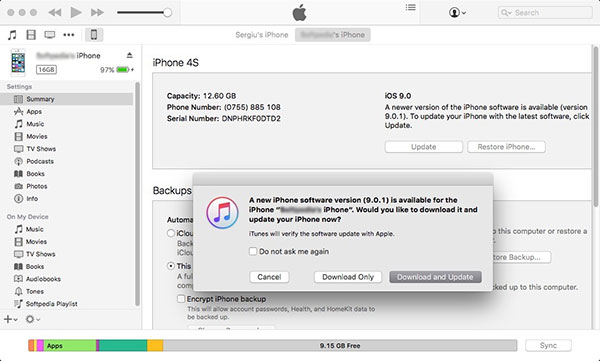 Now, after reading this article, you won't need to worry about how to update your iPhone4/4S. If you are willing to undo an iPhone update, here is the guide to help you with that. Actually, those methods work for all versions of the iPhone, you can also backup your iPhoneX by using dr.fone in one click.

iPhone 13 has been released! Compared to iPhone 12, new iPhone 13 has many new changes, look and check this guide!

How to Change Text Colors on an iPhone？

Want to change iPhone text color (including iPhone 13)? This tutorial would help you to change the color of texts on iPhone step by step.

The Best Guide on ESN and IMEI: Things You May Want to Know

iOS 15 beta regret and want to downgrade to iOS 14? Don't worry, this article will teach you the best tips to downgrade iOS 15 to iOS 14, just read it