How to Sync Fitbit with iPhone

Did you know how wonderful it would be to sync wirelessly with your phone without any hassles? Do you want to sync Fitbit with iPhone? It can be done easily!

Fitbit is a professional activity tracker with the purpose of keeping health & fitness first, so as to help people take care of their health. Many people love to keep an eye on how much calories are burned each day, so it is necessary to sync fitbit with their phone. This article provides you with comprehensive tips to sync fit with iPhone.

Part 1: How to sync Fitbit with iPhone

Did you ever think of how wonderful it would be to sync wirelessly with your phone without any hassles? The requirement is fulfilled by a device known as Fitbit. Fitbit is an electronic fitness device or machine that comes in the form of a wristband. The main objective of the device is to record and measure useful data to help users meet their health and fitness goals. The data recorded helps users to track their progress and it can be viewed and synced with the iPhone. It uses a tracker inserted into the wristband to sync with the phone. It is compatible with select iOS devices only.

Are you looking to sync Fitbit with iPhone? This can be done very easily. 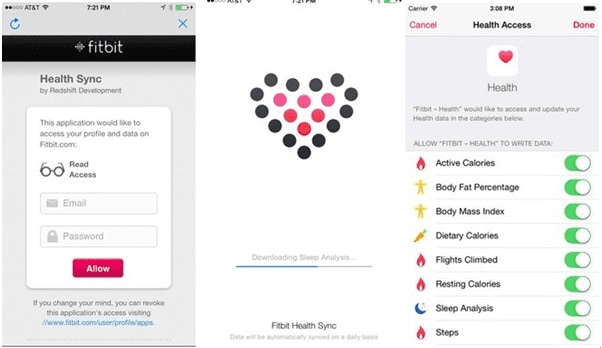 Syncing Fitbit to iPhone can be done in a few steps as mentioned below:

Step 1. First you have to download and install the Fitbit app on your iPhone. Then you need to open it.

Step 2. After opening the Fitbit app then click on the Join Fitbit button.

Step 3. Now choose the device to start syncing Fitbit with, and in this case it’s the iPhone. And then click on Set Up.

Step 4. After clicking on Set Up you have to enter the required details to create your account. In case you already have an account, you can skip this step.

Step 5. Now see whether you have been logged in to the Fitbit app.

Step 6. After logging in to the app, you will come across an option saying Sync on the go. Click yes to confirm the action and after the device has been synced you will receive a message confirming it.

Step 7. Click on the Done button after the syncing has been done. Now you can look at the Statistics.

Part 2: How to fix broken Fitbit

Fitbit devices are really popular these days. They are useful to record and collect health data and meet various fitness goals. And they may also stop working suddenly like any other device. But you don’t have to worry if Fitbit has been damaged or been broken due to some unfortunate mishap or accident. This is because Fitbit is a sturdy and efficient piece of technology. It can be fixed and made proper again with the use of some effective methods.

In case Fitbit tracker is not syncing or responding to movement or does not respond even where there is a charger, has a battery charge but is not lighting up or any other issue then it means that you have to restart the tracker.

Step 2. A paper clip is to be inserted in the tiny pinhole on back of the charger.

Step 3. Press the pinhole with the paper clip for about 4 seconds. Fitbit will now be restarted.

Step 2. Now the tracker’s button has to be held down for 12 seconds until the screen is turned off.

Step 3. After removing the tracker from the charging cable, you have to press the button till it is switched on. The tracker is now reset and the Fitbit fixed.

Step 2. Now place the battery into the tracker with "+" side up and close the door. The Fitbit has been restarted and should work properly.

Step 1. One end of the charging cable is to be plugged into the USB port and the other end on the back of the Fitbit.

Step 2. The Fitbit will begin charging. You have to hold the button on the Fitbit till an icon and version number appears.

Step 3. Leave the button and remove the tracker from the charging cable. The device is now reset.

Step 1. Plug a base station or Fitbit USB dock into the computer.

Step 2. Now place a tracker on the dock. Lastly, you have to press the gold button on the bottom of the base station with a toothpick or pen tip. The device has now been reset.

My Fitbit tracker is not syncing?

Do you see your steps on the Fitbit Tracker display? If the Fitbit One doesn’t illuminate after pressing button on the tracker, then you have to plug into the USB charger for charging. The charging terminals should be aligned with the charging pads and the computer should be switched on.

While in the case of Fitbit Zip, you should see the steps after tapping on the screen. Change the battery in case you don’t see any display and clean it with a cotton swab.

Plug the Fitbit Flex to the USB charger in the case of not seeing any light after tapping on the Fitbit. You may have to clean the charger terminals in the charger and then you will see two LED’s flashing to show that it is charging. If your steps are syncing to Fitbit?

Step 1. You have to log in to your Fitbit.com using the email and password on the computer. Now click on the gear icon at the upper right corner of the dashboard.

When your steps are syncing to Fitbit, there are some solutions available. You can press the button on the Fitbit and charge it with the USB if it’s not illuminating. You can reboot the computer as well. Sometimes the Fitbit background sync can be restarted if has been having some problems. You can also try to re-connect your Fitbit to the Fitbit account and replace the Fitbit tracker.

If the tracker is damaged or defective?

You can replace the tracker if it has been damaged or defective. You will have to replace your existing Fitbit with the new replacement by syncing it with the existing account.

Step 1. Right click on the Fitbit icon on the Windows task bar in the bottom right corner and choose Account Setup.

If you have been using Fitbit for quite a while now and it’s displaying your steps but you realise that the time zone is incorrect and the steps are syncing to fitbit.com. The solution is to update Fitbit Firm Tracker software and reset the Fitbit.

Background sync service is not functioning?

Whenever you get a message on the computer saying that the Background sync service is not functioning, it may be due to the presence of security software on the computer blocking the use of Fitbit sync services. You have to make sure that the software is added to the trusted software list so that it is not blocked. You will have to re-install the software if they have not been allowed in the previous installation.

How to Sync Safari Bookmarks from iPhone to Windows 10 PC?

How to Sync Contacts from iPhone to Another iPhone?

Sync data from iPhone to a new one is common when you buy a new iPhone, here provides best solution to sync contacts or iTunes playist to new iPhone.

Best Tips For You To Get Free Ringtones For iPhone

Do you want to download various ringtones for free on iPhone? Here introduces 12 best websites and apps for you to get free ringtones easilly.

3 Solutions | How to Transfer Photos from iPad to PC

Transferring photos from an iPad to a PC is no difficulty with the available techniques and tools. This article segregates three basic solutions to transfer photos from iPad to PC.

> > Resource > iPhone Transfer > How to Sync Fitbit with iPhone